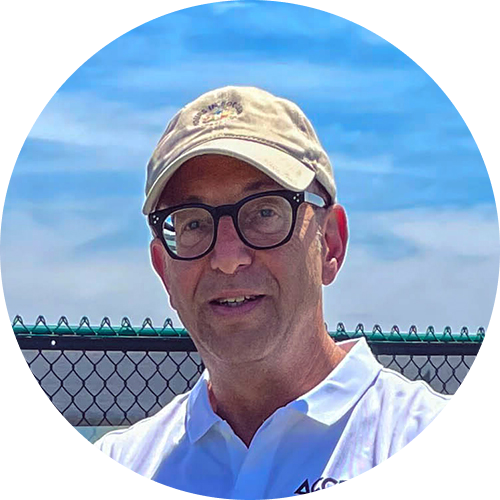 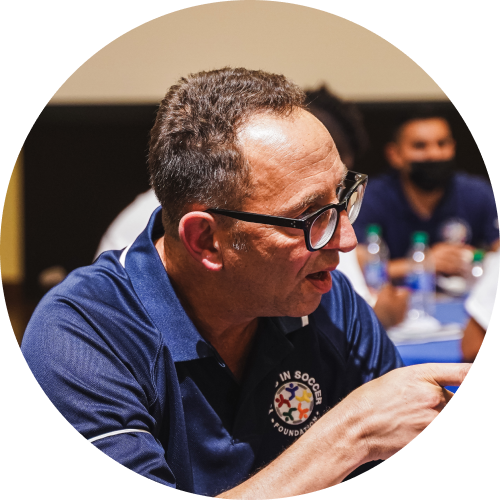 “What YSF means to me is that Robin Hood is alive and well. YSF takes the playbook used by well-resourced families to get their kids into the best colleges and uses these tools and the mentoring needed to support and elevate soccer student-athletes from overlooked communities. YSF invests in deserving student-athletes, providing them access they would not otherwise have to a college education.”

Yours in Soccer Foundation (YSF) is a nonprofit corporation, founded in 2014, whose mission is to empower exceptional student-athletes from underserved communities by leveraging the potential of sports to realize their college dreams.

YSF’s Programs advise student-athletes on how to showcase their athletic and academic abilities to college coaches and admissions personnel. By introducing them to the important linkage of sports and academics before they begin the college admissions process, they will be more likely to maximize their potential.

Yours in Soccer Foundation (YSF) is a nonprofit corporation, founded in 2014, whose mission is to empower exceptional student-athletes from underserved communities by leveraging the potential of sports to realize their college dreams.

YSF’s Programs advise student-athletes on how to showcase their athletic and academic abilities to college coaches and admissions personnel. By introducing them to the important linkage of sports and academics before they begin the college admissions process, they will be more likely to maximize their potential.

Jerome is a life-long soccer enthusiast who believes in sport for youth development and conceived YSF as a force for positive change in the outcomes of deserving yet underserved young people. Jerome founded YSF on the fundamental premise that a capital vacuum exists in competitive youth soccer. It was eminently clear that mainly rich kids were using soccer to get into America’s best schools. Jerome created YSF to level the playing field between rich and poor elite soccer student-athletes. Jerome has been an investment professional since graduating from Stanford Graduate School of Business in 1990.

Kerri has worked in the nonprofit sector for 15 years with a keen focus on using sport to empower underrepresented student-athletes. Kerri’s philanthropic approach is rooted in creating educational opportunities by providing leadership training, access to critical resources, and mentorship to change the life trajectory of student-athletes. Her professional experience has contributed to the success of multiple nonprofits focused on empowering young athletes. Kerri is a graduate of the University of CA, Berkeley with a Bachelor of Arts degree in Legal Studies, and a minor in Sociology.

Beto grew up playing competitive club soccer in San Diego, California and was recruited to play at the collegiate level for Holy Names University, making him the first in his family to attend college. Beto later completed a Masters in Social Welfare at UCLA and gained extensive experience providing social services to diverse populations. At YSF, Beto’s role is to raise awareness about the Foundation’s mission among the youth soccer development and college coach communities. He also guides students and their families throughout the college recruitment process with the aim of helping students identify the best fit college.

Gloria has dedicated her career to increasing college access by working directly with families and communities who have been historically underrepresented in higher education. She supports YSF’s efforts to reach deserving students by managing the college mentorship program and sustaining partnerships with other nonprofits, academic service providers, and club soccer teams. Gloria is a first-generation college graduate, holding a Bachelor of Arts in Global Studies from UCLA and a Master of Arts from Columbia University’s Teachers College.

Carlos is a first-generation college student who emigrated from El Salvador to the United States when he was fifteen years old. He is a Ph.D. student in Higher Education Administration and Policy at UC Riverside. Prior to UCR, he earned his bachelor’s degree in History and Public Policy at UCLA and a master’s degree in Educational Counseling in Higher Education at USC. Carlos has worked with high school students in the greater Los Angeles area as they applied and transitioned into college.

Manny was born and raised in Escondido, CA. He played competitively in the U.S. Develop Academy and was recruited by Dartmouth College in 2012. During his college career, Manny played for the Big Green, won three Ivy League Championships, and was captain his senior year. Manny discovered that the process of becoming a collegiate student-athlete was extremely difficult for a first-generation Latino. As a result, he is extremely passionate about using the game of soccer as a vehicle for awareness in underserved communities.

Yedi serves as the YSF’s treasurer and oversees the accounting, finance and tax responsibilities. In addition to supervising the annual budget and prioritizing grant making opportunities, Yedi assists the executive director with building strategic relationships and monitoring the foundation’s local and regional impact. Yedi has a Bachelor of Science in Business Administration, Accounting from California State University, Hayward and a Masters of Science in Taxation from Golden Gate University.

Leslie serves as the assistant to both the president and the executive director of the Foundation. Leslie handles all aspects of the Foundation’s operational and charitable duties. She also works to maintain the integrity of Yours in Soccer’s financial and legal record keeping. Leslie graduated from the University of California, Davis majoring in Psychology and English.

Avery serves as a mentor to YSF scholars in the Bay Area. He provides advice, support, and guidance to help scholars navigate the college soccer recruiting process. He graduated from Yale University with a major in Economics.

Rafa is a former FC Dallas Academy player and Holy Names University student-athlete who competed on the men’s soccer team for four years earning All Pac-West honors. He graduated from Holy Names University in 2021 with a double major in Business Sports Management and Business Marketing. Rafa grew up in the soccer community and is passionate about helping younger generations find the opportunities and resources to combine their academic and athletic talents.

Matthew Dunkle is a first-generation college graduate earning his Bachelor of Arts in English Literature and master’s in educational leadership from National University. He teaches high school English in San Diego county. Matthew’s dedication to help underserved communities does not stop in the classroom as he has over seven years of experience guiding students and their families through the college preparation process. He enjoys mentoring youth and exposing them to the vast opportunities they have beyond high school.
Meet the Team
OUR PROGRAMS

How we do it

The mission of the YSF Mentorship Program is to help low-income college bound soccer players successfully navigate the college recruitment process. We seek to empower our student-athletes to use this process to build upon their passion for the beautiful game while developing and maximizing their potential as a college recruit.

The YSF Summer Immersion Program provides a space where students can deeply reflect on their educational path and its connection to soccer and their future goals. Through various activities and a thoughtful schedule for the week, YSF equips participants with accessible tools and resources to help develop a long-term vision of their college goals and take ownership of their recruitment process.
Learn More
OUR NUMBERS
0
Student-athletes have received
free SAT/ACT test prep
0
Student-athletes have committed
to play college soccer
0
Student-athletes benefiting
from Yours in Soccer support
CLASS OF 2019

Ashish is from Fremont, California. He is the first in his family to attend college. Ashish benefited from the YSF Mentorship Program and took full advantage of other YSF resources such as test preparation and participation in the Summer Program. He was accepted into the University of San Francisco’s Men’s Soccer Program, where he played two seasons. He then transferred to the University of California, Irvine where he is majoring in Sociology and will finish his final soccer seasons.

Noel is from Van Nuys, California. He is a first-generation student-athlete. Noel grew up deeply aware of his parents’ sacrifices which fueled his motivation to be successful and make his family proud. While taking part in the YSF Summer Program, Noel made the decision to commit to Cornell University Men’s Soccer Program. Noel has heavily influenced his younger brother to follow in his footsteps as a dedicated student-athlete determined to play collegiate soccer.

Troy is from Long Beach, California. He is a first-generation student-athlete. He had the opportunity to participate in the YSF Summer Program and was immediately connected to test preparation resources. He came to appreciate the value of a well-rounded Division III program that met all his personal, academic, and athletic needs. Troy decided to commit to the Claremont McKenna Men’s Soccer Program where he has played a key role on the team.

Brandon is from Palo Alto, California. He is the first in his family to attend college. Brandon initially joined the YSF mentorship program when he was in the 8th grade. Since then, he has remained determined to reach his goal of playing college soccer and benefitted from YSF resources such as test preparation. Brandon committed to UCLA Men’s Soccer Program and joined the Bruin family in the fall of 2021.

Roots SC harnesses the magic of Oakland and the power of sports as a force for social good.
Website

Is a tool to empower, educate, and inspire Oakland's leaders of tomorrow.
Website

What people are saying about YSF

Yours in Soccer has helped Soccer Scholars Foundation support and place more than 70 student-athletes over the past five years. Without both the mentoring and financial support from YSF, many of these student-athletes would not be on the right path to playing in college.
Linda Ramsbottom
Executive Director and Co-Founder Soccer Scholars Foundation

Yours in Soccer has been a fantastic support for our student-athletes in regards to college preparation, admissions, and recruitment. Our students who are working with YSF are more knowledgeable about college-related tasks and processes that must occur while in high school. Ultimately, YSF has empowered the student-athletes to take ownership of the path to being collegiate student-athletes.
Stefanie Baduria, Ed.D.
LA Galaxy Academy

Manhattan Soccer Club is a youth soccer club that is home to more than 1,300 travel players. Prior to Manhattan Soccer Club partnering with YSF, far too many scholar-athletes with financial hardships were falling behind as they advanced through middle and high school. Thanks to the generous support of YSF, we now offer our scholar-athletes much needed hands-on assistance with academic test prep and a better high school track over multiple years of service.
Rich Corvino
Executive Director

Prestige Prep is thrilled to partner with YSF in the initiative to offer academic test prep and overall support to a specific eligible audience within the Manhattan Soccer Club. We feel extremely fortunate to be able to touch the lives of young scholar-athletes as they begin the search for the right high school which can lead them to college and beyond. Preparing students for academic success alongside their soccer journeys is a pairing we believe in – and we are thankful to YSF for this shared vision and important partnership.
Phil Cohen
CEO & Founder

Oakland Genesis is a youth soccer club using the game of soccer as a vehicle to improve the educational achievement of its participants. Over 90% of the youth in our program come from low-income households and over 75% are first generation children of immigrants aiming to be the first in their family to attend higher education. Working hand in hand with YSF, Oakland Genesis offers a curriculum for middle schoolers that continues through high school. YSF’s support is a pillar in our efforts to graduate 100% of program participants from high school with college eligibility.
Matt Fondy

Please join us as we work to provide resources, education, and inspiration to first generation low-income scholar athletes who are passionate about the game of soccer and their education.

We use cookies on our website to give you the most relevant experience by remembering your preferences and repeat visits.
By clicking “Accept”, you consent to the use of ALL the cookies.

By clicking “Accept”, you consent to the use of ALL the cookies.